As you can see this Asian Noodle Soup looks absolutely scrumptious. This soup is also great option for those on an Alkaline Diet or Alkaline Cleanse. If you love Asian dishes, this soup will not disappoint 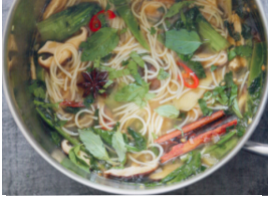 . The mouthwatering recipe gives off a wonderful aroma, and also has cleansing properties. A hint of cinnamon coupled with star anise provides delectable base flavors in addition it’s antiviral qualities. Below is a step by step recipe for making this yummy alkaline cleanse recipe that serves 2 people. I’m sure you will enjoy this soup just as much as we did!